Our Sound of Music Tour

Our Sound of Music Tour is offered as a private tour (on request only) and designed exclusively for those who are staying in (or starting in) Berchtesgaden.

This delightful tour combines Salzburg’s history and architecture with the main locations used in the film. This unique tour is conducted by native English speaking Sound of Music authorities who can tell “behind-the-scenes” stories about this film classic.

En route from Berchtesgaden to Salzburg your guide will recount Berchtesgaden’s role in the filming of the Sound of Music and describe the sites that were used in this area.

In Salzburg a walking tour (approx. 1 hour) will introduce you to the city’s architectural highlights and numerous filming locations, including:

– Mirabell Gardens (second half of “Do, Re, Mi”)
– Salzburg Cathedral (location of 2 scenes in the film)
– Residence Square (location of 2 scenes in the film)
– Chapter Square (Maria boards a bus)
– St. Peter’s Cemetery (model for escape scene)
– Outside of Felsenreitschule (farewell concert)
– Nonnberg Abbey (4 scenes) (optional for good walkers only)

Following your pleasant stroll through town, you’ll enjoy an hour free time in Salzburg before returning to Berchtesgaden.

On the way back from Salzburg to Berchtesgaden your guide will recount the true story of the von Trapp family and how it was made into a film classic, still so popular today. Songs from the film will be played during the driving tour, setting the tone for a memorable morning.

Price
Cost of a half-day tour starting in Berchtesgaden:

The tour departs at 8:30 am from the either the Berchtesgaden train station or our office located at the Berggasthof Obersalzberg on Obersalzberg.

Book your Sound Of Music Tour
What Participants say 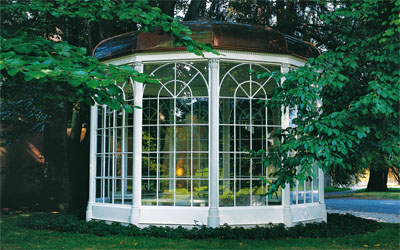 The “gazebo” used in the film
PreviousNext
1234